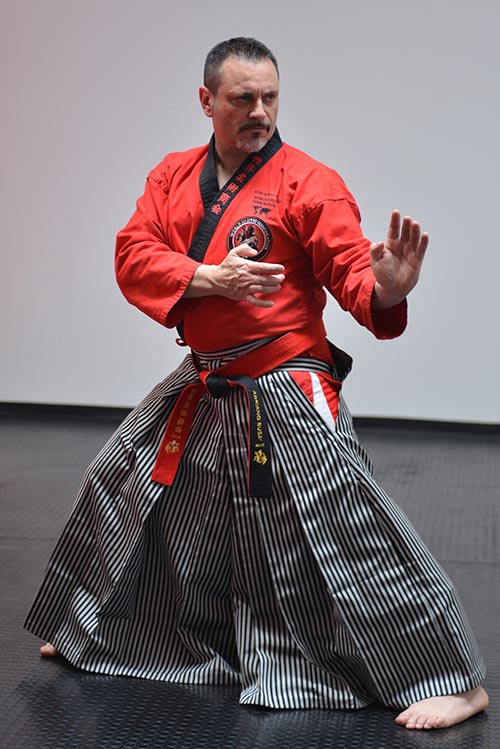 Shodai Soke Adriano Busà 9th Dan is the founder and international technical director of World Ju-Jitsu Corporation. The Ju-Jitsu style he has codified is “Kishido” - 騎士 道 (The way of the Knight).

He manifested his passion for martial arts at a very early age when, because he was enthrolled by martial arts movies of the time, after his homework  he would spend his days punching and kicking all over his house imitating his favourite heroes.

He had his first martial experience in the late 1976 when an old master who was a family friend, in a mix of game and tricks, passed on him the first rudiments of Judo. In 1977 he made a rudimentary Nunchaku with two rectangular wood logs and two nails found in his father’s company and broke a window in his house, to his mother’s joy.

Despite his mother’s opposition, he goes on with this bizarre training after school. In 1981 Adriano enrolled in a Dojo for the first time to practice Judo with a real Sensei and wore his first Jodogi, something he had so lusted for.

He keeps practicing Judo for some  years until the first regional competition and he achieves the blue belt in Judo. This experience with Judo drew him near to the tatami, though it would never totally satisfy him. As a matter of fact, in the late 1985 he changed completely and started practicing boxe, which he taught was more fit for his temperament. However, not even this sport satisfied him completely.

He went on searching for such a discipline that would complete and unable him to express himself  at his best . After brief experiences in some other martial arts, once he was dazzled by a Ju-Jitsu lesson being hold in the gym he attended to keep fit and decided to take a trial lesson at once.

He was surprised by finding that Ju-Jitsu includes all in itself and how much his past experiences were both useful and precious. He realized at once this was what he had always been looking for and he’d finally found it.

This extraordinary Japanese martial art would later become his great passion. He began training very hard with hunger for knowledge. It is because of this inner fire and hard work that he reached important goals in the federation of that time.

Meanwhile, he matured as both a technician and a Sensei and little by little became a benchmark to several students who chose to follow him. In the couse of time, he came into contact with an instructor from the Special Forces and perfected himself in the field of professional self defense.

At a later time he established a company dealing with professional training for police and military. Besides carrying forward his great passion for Ju-Jitsu, this agency was the only company in Italy with UNI EN ISO 9001 quality certification and accreditation from Tuscany Region.

In 2014 he established the World Ju-Jitsu Corporation in London and thus began a new phase in both his life and martial career, always on the rise. Many groups, which learnt of his new organization, joined him since the very beginning, and many countries would join the WJJC project in laters years.

His philosophical vision lead him to organize the World Ju-Jitsu Corporation in such a way that everyone is given the opportunity to grow and improve while helping others to do the same as they follow the same principles. His philosophy is contained in the three Musketeers by Alexander Dumas’ famous motto: «All for one and one for all!» convinced of the importance of forging a group and making all members of the group feel proud.

Soke Adriano Busà is a true leader, one who never backs down, tireless, always ready for action, not only on the tatami. Not only is he always available for his direct students but also for all students of the Wjjc, especially for the youngest, indeed he has a very strong feeling of sympathy for them. He is a point of reference for many of them, ready to  listen to them, he establishes a deep relationship based on mutual respect and is good at providing both martial and personal advices and ideas.

Soke Adriano Busà technical skills are highly appreciated all over the world and allowed him to reinterpret traditional Ju-Jitsu and turn into “Kishidō” the Wjjc style, one that is both modern and effective and is based on precision and rapidity, while remaining firmly rooted in the traditional values of the Budo.

Today, Soke Adriano Busà with his charisma still keeps passing on his Ju-Jitsu style to anyone wishing to join the World Ju-Jitsu Corporation and who shares its values and gives  them the opportunity to become true professionals in Ju-Jitsu and to be part of a large innovative, modern and successful international organization.

Wjjc, Proud to be different!