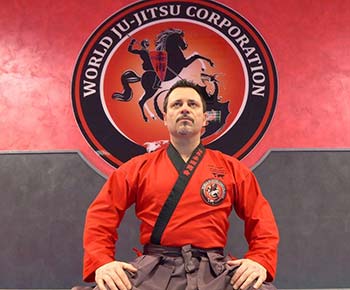 This is the way I begun practicing ju-jitsu with all my self-denial and after gaining the black belt I became the technical director of my town – Florence and after a short time National President for the international federation I belonged to. I begun travelling abroad (especially to England) to deepen my experience in the Ju-Jitsu sector and I also got to know military and police instructors. Nowadays, I represent the World Ju-Jitsu Corporation worldwide, which I’ve founded. We have schools affiliated in Europe, in the Americas and in the Middle East and go on studying and developing Ju-Jitsu, Kobudo and professional self defence training for police and military.

In Italy you train the members of the military, police and other security structures. Can you tell something more about the department ANS SAS – Special training service?

Your organization received accreditation Regione Toscana and internationally certificate in quality. What does such recognition mean for you?

Accreditation from a regional body, added value in terms of overall recognition of our professionalism from the local institutions. The Iso 9001 Certification lead us to a professional management and development of our training protocols and we are currently the sole agency owning such protocols in Italy. Such professionalism, which we first built nationally and that we are now exporting, was recognized by the European Institutions, which choose the World Ju-Jitsu Corporation as their represent of the Ju-Jitsu, Kobudo and professional self defence sectors all over Europe. I have personally received the title of Professor (Headmaster) and entered the professional register with 8th Level plus EQF (European Qualification Framework).

You cooperate with Centre for Security Education in Slovenia, which operates in IVK Institute. Are your programs also suitable for training self-defence for citizens/civilians (women and youth)?

As already said, our training programs (both Ju-Jitsu and STS) also offer self defence training for civilians (both men and women), specific training for women is included.

What are your plans for the future of World Ju-Jitsu Corporation (WJJC) and ANS SAS – Special training service?

My main goal has always been, and will always be, offering the possibility to anybody to improve themselves by learning professional self defence (either Ju-Jitsu or STS). Ju-Jitsu is a means to get to know ourselves and it helps us discover our own limits, it does turn our weaknesses into strengths. So my plans for the World Ju-Jitsu Corporation and for STS are exactly this, to propagate our Ju-Jitsu style and STS method worldwide and give a chance to all those who share our principles and are interested in deepening the knowledge of our programs.

Patricija Bukovinski, Andrej Kovačič - Email: This email address is being protected from spambots. You need JavaScript enabled to view it.