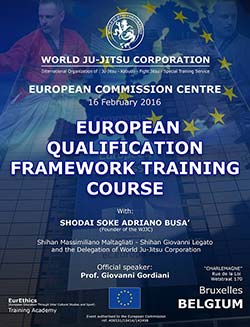 The World Ju-Jitsu Corporation is proud to announce that on the 16th of February 2016, in the person of its founder Adriano Busà and a delegation of Black Belts, we will be in Bruxelles at the Visitors' Centre of the European Commission, in order to attend the course on the EU's Role and the “European Qualification Framework – EQF”, run By Prof. Giovanni Gordiani as a speaker.

The course is aimed at confirming the World Ju-Jitsu Corporation – which had already received accreditation during the European Week of Sport at the event EurEthics Sport for All – within the European Framework for Qualifications, according to EurEthics principles. EurEthics' certification methods comply with the European Qualification Framework as well as with the ISO/IEC 17024:2012 Conformity assessment – General requirements for bodies operating certification of persons (ISO 17024 Licensed to Eurethics Training Academy Number: OP-22926 of the 19/08/2014), which regulates personal professional competences, in this case as a sport educator (Educator through Sport). On this occasion, Shodai Soke Adriano Busà, will be given the title of Professor (Head Master-Academy Professor) in recognition of his international professionalism in Ju-Jitsu. What is more, Shodai Soke Adriano Busà will be given the 8th Level EQF Certificate, the highest grade in the Professional Register Education through Sport Instructors Association – ETSIA, registered as European Qualification Framework (Eurethics/Etsia) and National in Italy Endas/PAS (professionisti associati sportivi).

This way, the World Ju-Jitsu Corporation enters into the history of sport as the first organization in the Ju-Jitsu sector receiving mandate from EurEthics/ETSIA to issue certifications “Sport Educator” according to the National Framework of Qualifications and according to the EQF, reference framework in Europe and Internationally, in compliance with the recommendation of the European Parliament and the Council of 23 April 2008.