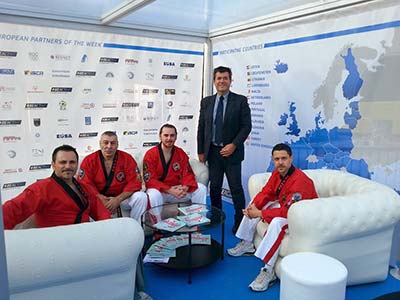 The World Ju-Jitsu Corporation, represented by its founder Shodai Soke Adriano Busà and its delegation made up by the Italians Shihan Maltagliati, Shihan Legato and Sensei Morelli, had the honor of being introduced as high representatives for the ju-jitsu sector at the European Commission.

After careful evaluation from the part of the European institutions, the WJJC has been recognized as the ideal partner to entrust with the Ju-Jitsu sport sector. Moreover, Soke Adriano Busà and his Black Belts were asked to perform in front of an audience of international athletes at the “Beactive-European Week of Sport”. This way, the World Ju-Jitsu Corporation officially and directly joins the professional training project that the European Commission is developping by selecting the most competent and professional sport representations on the international scene.

It is a great honor and privilege for our organization to cooperate with the European institutions to draw up new Ju-Jitsu protocols according to very high professional standards with certification ISO. A very demanding task, which our Soke Adriano Busà will carry out confident of his great experience internationally recognized.

The WJJC delegation will be going to Bruxelles on November to settle last details for issuing ISO certifications.