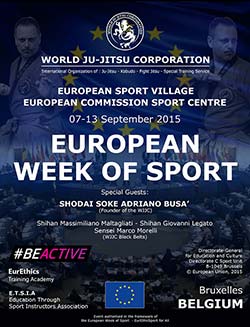 The World Ju-Jitsu Corporation, represented by its founder Shodai Soke Adriano Busà, is proud to announce that from the 10th to the 13th of September 2015, has officially been invited to the official events of Bruxelles at the “European Week of Sport”, organized by the European Commission and in collaboration with EurEthics/Etsia/Endas. Such events deal with the basic themes of education through sport and high level training in martial arts, among which Ju-Jitsu acts a prominent part. The events of Bruxelles will be held at the “European Sport Village” and at the “Sport Centre of the European Commission”, by means of seminars and conferences on martial arts, where we'll participate as guests of honour for the Ju-Jitsu sector. Our Shodai Soke Adriano Busà will take to the event some of his best Italian black belts, Shihan Massimiliano Maltagliati, Shihan Giovanni Legato and Sensei Marco Morelli.

It will be a great honour and satisfaction for the WJJC to represent Ju-Jitsu after careful evaluation from the part of EurEthics Training Academy, body with accreditation from the European Commission of Bruxelles and represented by its President Prof. Giovanni Gordiani, who we publicly thank.

The WJJC, always concerned with ethics in Ju-Jitsu, we'll secure high ethical standards in Europe together with its technical and educational skills.